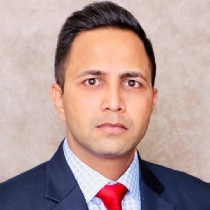 What and where did you study before your Mountbatten internship?
I studied for a Bachelor in Computing from Guru Gobind Singh Indraprastha University, and also held a Post Graduate Diploma in Financial Planning from ICFP (both in India).

What made you apply for the Mountbatten program?
I was just one year into my post graduate job and had a real passion to work in financial services. I really liked the idea of working with a Global I-Bank, so I went for it.

Describe your sponsor company and your role within it.
I worked with UBS Investment Bank in their Corporate Actions function (Proxy Voting)

What was the highlight/most memorable moment of your working experience during this year?
With the support of my mentor and colleagues, I had got up to speed really quickly and became the go to person for the department. I had also managed two vendors (Ind and UK based) as part of my job responsibilities, which was a step up. However, the most memorable part was fun times spent with my team. I would rather be in the office with them than at my apartment taking a day off!

What was the social highlight/most memorable moment during this year?
I represented Kent based Hadlow Cricket Club in ECB affiliated cricket league and played a key role in taking them to the higher division. I was invited to play by my manager, who was Cricket enthusiast and supported the club as a local.

Please share a little wisdom/philosophy that you acquired during your internship
Have fun and gain from the multiple cultures and experiences all interns bring to the table. My most important take away was to gain practical experience rather than degree/theoretical experience. I had strongly wanted to be an MBA graduate previously (typical in Indian system), but now I hire MBAs from top U.S. graduate schools and experienced MBAs from Ivy League Colleges, even though I don’t hold one myself!

Would you have done anything differently, if you had your time over again?
I probably would have partied a bit more than I did, but I was always very focused on leveraging my time on the program to use it as springboard for a career boost.

What happened after completing the year – what did you do next?
My sponsor company wanted to retain me, but unfortunately, visa rules didn’t allow for that. Instead, I went back to my hometown of Delhi, and it took 5-6 months to get a job, as North India didn’t have any financial services jobs.  However, I eventually managed to obtain a position as an Equity Researcher and covered European and UK banks (a definite step up from back to Front office)

Where are you now in your working life and what do you do?
I am based in Chicago as Head of Consulting Business for the largest and fastest growing industry for Genpact, a spinoff from GE, and now (NYSE listed) a MNC. I work with CXOs and provide them thought leadership on how to transform their businesses using technology, digital, data and analytics capabilities.

Do you have any future plans that you would like to realise & what are they (career & social)?
I have always had an entrepreneurial mindset, and the roles I have chosen to do always led to/ had business (P&L) creation and management. Perhaps I would start my own venture one day. On the personal front, I would like to pursue Cricket as a profession (may be the oldest debut!), and give back to society (helping students through financial support and professional guidance to ensure their potential is realized).

What would people be surprised to learn about you?
I played with the name Vicky on my jersey for a year, and eventually my team came to terms with my explanation that Vicky is to Vikas in India as Dave is to David in UK/USA !. For all of you giggling, MB allows you to learn more about different cultures.

Is there any other information that you would like to be included?

So, sharing the mantra that has worked time and again… GRIT defies the odds!!