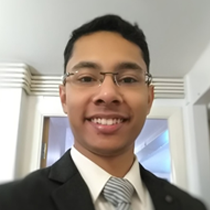 What and where did you study before your Mountbatten internship?
Before joining the Mountbatten Program I studied Accounting and Finance for my undergrad at St. Xavier’s College. I wanted to study biology and my parents wanted me to study Accounting. A deal was reached and it was decided that I would study accounting! “There’s an expiry date to blame your parents”, says my favourite, J.K. Rowling and I would agree. I have stopped blaming them as I enjoyed the subject over the years. It is as practical and scientific as biology.  I was also progressing towards my Chartered Accountancy qualification and gaining practical experience at an Accountancy Practice. Over the years, balance sheets and profit & loss statements have started to make much more sense, but I was missing developing as a person.

What made you apply for the Mountbatten programme?
I was about to finish my apprenticeship at the accountancy practice. The obvious path would have been to look for a full-time job after that. But a friend of mine who had already done the Program a few years back told me about it. I had always wanted to gain international exposure. It helps you to grow as a person, as international experience provides different perspectives of approaching the same problem. The Program suited me well for two reasons, one because it would give me the dual advantage of academics and practical experience, and two because I could manage my living expenses with the allowance support which I would get.

Describe your sponsor company and your role within it.
My sponsor company was BlackRock-and I am still working for the firm. As a Mountbatten trainee I was supporting the EMEA Retail business in Financial Planning & Analysis(FP&A). As a team, we were supposed to analyze financials and help business managers make strategic decisions. For a flavour- what would be the revenue impact on the firm if we switched share classes of an investment product in a specific market domicile? This was the kind of request we would receive from the business management regularly. I always felt that I was able to make a small but meaningful impact.

What was the highlight/most memorable moment of your working experience during this year?
Towards the latter half of my Mountbatten year, I was driving a project to build a dashboard for the head of family offices at our firm. As the deadline approached, I was forced to question myself-have I signed up for something too big for me? But eventually, everything was done successfully. Later on, after I had been offered a permanent role at my firm, my manager mentioned that he had received a very positive response from our stakeholders, especially after this project. He was very proud of having chosen me in the first place as the Mountbatten intern for his team. This made me feel really happy.

What was the social highlight/most memorable moment during this year?
There are numerous memorable moments of the Mountbatten year, from Hawaiian themed birthday parties to potlucks, but the one which strikes to me the most is the wait on the banks of Thames for the New Year fireworks to go off. All of us were happy as well as sad. A new year full of opportunities lay in front of us, but this meant that the time for goodbyes was coming soon. We were no less than a family by now. The countdown began and the fireworks went off. What a sight it was. The journey back home that night was even more eventful. The only bus which came after waiting for twenty minutes broke down within five minutes of being on it. We decided to walk to Shoreditch instead (our favourite clubbing place) and had loads of fun.

Please share a little wisdom/philosophy that you acquired during your internship
I believe the most important thing I learned during the year was becoming adaptable and open. I was in a foreign land and one starts craving people when not in physical touch with family and friends for a very long time. What helped me a lot was connecting with the people around me. I had two options-forming a close circle of very good friends or interacting with everyone. I chose the latter, and I think it was the best decision ever. I still listen to songs introduced to me by my flatmates and watch American football sometimes (don’t know why they call it football!). I had struck a little friendship even with the security guard at Tesco I regularly visited after he had checked my bank statement on three different occasions thinking me to be a shoplifter.

What happened after completing the year – what did you do next?
I had received an offer for a permanent role at BlackRock in my home country before the end of the program. I had a 2-week break before I moved to a new city-Gurgaon to take on the new role. I was super excited about the move as I already knew most of my colleagues from my time in London, but at the same time was moving to a new city. Even my division was the same-FP&A, so it felt like a continuation rather than a fresh start.

Where are you now in your working life and what do you do?
Currently, I am in Mumbai, closer to home. Recently, I took a new role in BlackRock’s Mumbai office. Yes, three years and three different locations. I am very grateful to my firm for providing me the opportunities. In my current role, I support the LatAm business of our firm by helping business managers make informed decisions with the help of data and analytics.

Do you have any future plans that you would like to realise & what are they (career & social)?
I would like to be in my new role for some time before going back to school to pursue MSc in Finance. This is for two reasons; I would like to gain deeper knowledge in the field, and I love studying.  I may be technically sound in my field, but I want to grow as a person and have an all-round development. I plan to increase my network, read more about diverse topics, and enjoy my life to the fullest by traveling (when the virus is gone, of course!).

What would people be surprised to learn about you?
I learnt cooking during my Mountbatten year.