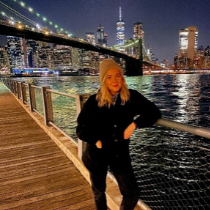 What and where did you study before your Mountbatten placement?
I studied history at University College London, with a particular focus on US history. Upon graduating, I worked in radio for Bauer Media, local newspapers, radio stations and publications, as well as a host of other Digital Content and Marketing roles at agencies.

What made you apply for the Mountbatten Program?
When I first visited New York aged 18 I always knew I wanted to live there at some point in my life. My cousin was a Mountbatten around eight years previously, and I was intrigued about his experience. After a year working, I knew I wanted to work in media. It can be a difficult industry to crack, so I wanted to do all I could to differentiate myself. Working at a global media giant in New York for a year seemed like just the ticket.

Describe your host company and your role within it.
I was a Digital Marketing Executive and Content Manager at Thomson Reuters, for a financial video platform called Reuters Insider. This was in 2013 when video streaming was really starting to take off. It functioned much like a start-up in a much larger company, so I was solely responsible for all Digital Marketing and Editorial Calendars. As a platform for video journalism, the team was uniquely positioned at the cross-section of the tech and editorial parts of the business, meaning I gained invaluable insight into both areas. Whether it was producing videos to highlight the capabilities of Reuters Insider to co-workers, assisting on shoots, working on video metadata or writing blog articles, I learned to navigate my way across multiple platforms and mediums. It was the perfect training for a career in media.

What was the most memorable moment of your working experience during this year?
A definite highlight at Thomson Reuters were the opportunities I had to work with Reuters Journalists that I really admire. Very early on in my placement, I was assisting on an interview conducted by Journalism legend Sir Harold Evans — I even had a chance to operate a camera! From then on, I was lucky enough to help out on a show called US Morning Call which streamed every morning on Reuters Insider. Another moment that had a huge impact on me was attending the Reuters Journalist of the Year Awards, which really affirmed my commitment to storytelling and media more generally.

What was the social highlight/most memorable moment during this year?
New York is full of incredible opportunities at every turn. As someone who wanted to squeeze every last drop out of the year and fulfill an ambition to work at the BBC upon my return, I got involved in lots of radio and music volunteering during my year. I wrote some music reviews for a legendary radio station called ‘East Village Radio’, wrote my own music blog, sat in on recordings at WABC and WNYC, as well as working on a project for SB:TV. As a massive music lover, I saw so many of my favourite bands live that year, including Fleetwood Mac, Bob Dylan, The Staves, Laura Marling, Daughter… I could go on!

Please share a little wisdom/philosophy that you acquired during your placement.
If you don’t ask, you don’t get. The year is all about pushing yourself outside your comfort zone and learning. If you’re in a large company, you should make sure you capitalize on every learning opportunity you can. Go to talks, informal coffees and networking events. Also, one thing that might sound a little simple, but: don’t forget to have fun! I was incredibly career focused and could often be found squirreled away in a coffee shop working on a project or blog. You won’t get the time back, so balance out the passion projects and work, with straight-up, simple fun!

If you could change anything about your year in New York, what would it be?
Apart from living in New York, rather than New Jersey, I’d say I would have spent more time in Brooklyn. And I might have had more time to spend there, had I not been blogging or volunteering (not that I have any regrets about that!)

What happened after completing the year – what did you do next?
Anyone who knows me knows I wanted to work at the BBC. I had a singular vision and would not rest until I clambered over the walls of New Broadcasting House. In the immediate term, I worked as a Researcher at a production company called Wise Buddah, who also produce a lot of BBC Radio shows. I applied for a number of roles at the BBC, and eventually in July 2014 was fortunate enough to land an Editorial role at BBC iPlayer. I’d always described Reuters Insider as the ‘BBC iPlayer for Financial Video’, so it felt like the perfect opportunity. While the type of content was very different, all the skills I’d acquired during my year in New York really came into play in this job.

Where are you now in your working life and what do you do?
After four years working at the BBC in London, working in digital for BBC One, BBC Two, Strictly Come Dancing, BBC Podcasts and Radio 2, I made the jump back across the pond to do the same for BritBox. Launched two years, BritBox is a streaming service created by the BBC and ITV, bringing British TV to audiences in both the US and Canada. As a Social and Content Manager, I am responsible for sourcing, producing, publishing and optimizing digital content that promotes the service, brand and British culture to BritBox subscribers and beyond. I’ve been back in New York for just over two years so far and it’s been great to continue exploring the city and pick up where I left after Mountbatten.

Do you have any future plans that you would like to realize & what are they?
So many! I have lots of fantasies about the future and I’m a true believer of dreaming big… even if they may sound ridiculous. With that in mind, I really want to: make podcasts, direct a film, write a book, travel the world and swim with Great White Sharks. And that’s just a few things on the list!