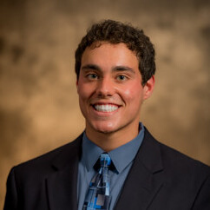 What and where did you study before your Mountbatten placement?
I graduated with a BSBA in Finance from Xavier University. I chose to study finance because I was interested in the financial markets and how finances drive decisions within an organization. Xavier is one of 27 Jesuit colleges, the fourth-oldest, in the US (Boston College, Georgetown, and Fordham University are others to name a few recognizable ones). This meant that the core curriculum was quite extensive as the Jesuit way is to educate the whole person. Thus, I took a lot of required classes in a multitude of subjects, which was a great benefit to me as a person.

What made you apply for the Mountbatten Program?
I did a summer study abroad in the Netherlands between my Sophomore and Junior years of college. This experience had a lasting impression on me and opened my world view. Fast forward two and a half years later and I was searching for a new job at the end of 2017. Since I was not tied down to an employer at the time, I figured an experience like Mountbatten could be on the cards. It was perfect timing when I found out about the program through LinkedIn, and considering I was itching to go back to Europe, made it all the better.

Describe your host company and your role within it.
My host company was Pomerol Partners, and they are a data-focused consulting company. My defined role was being a business intelligence (BI) consultant, although I would say what I did throughout my placement was much more operational than analytical. I supported those working on engagements, I was not placed solely on an engagement. However, I did still learn a lot, and it was there that I was introduced to the topic that I chose for my MA dissertation: Robotic Process Automation is the Changing Face of Business Operations: How it can be adopted to build a sturdy automation conduit that can bring maximized ROI.

What was the highlight/most memorable moment of your working experience in London?
I will always remember how we worked in a WeWork for several months in Holborn. It was quite the experience to work in that kind of office environment, and the coffee machines/beer on tap were an added plus. Around that same time the World Cup was going on and there were local pubs within walking distance of the WeWork, which made it all the better, especially on a Thursday or Friday evening.

What was the social highlight during this year?
Besides cheering on England in the 2018 World Cup and experiencing the madness and joy of the city when they made it to the semi-finals, I would have to go with our intakes end of the year banquet. My roommate and I had an idea to do a superlative award show at the banquet (we called it “The Reflections” for our shared adoration for Dr. Fahri Karakas). It was a lot of fun and everyone loved it. Adding that personal twist to our intakes goodbye celebration is something I will never forget.

Please share a little wisdom/philosophy that you learnt during your internship.
Leaving your home country for a year to be in a new place is thrilling, and it’s easy to romanticize the destination and that year abroad. However, it does not come without its challenges. You may live with people you don’t like and you may work with people you don’t like. You also might not enjoy your job at all. On top of all this, you will be living in an entirely new place where people behave differently to you and use different words and expressions than you are accustomed too. Somehow you will need to navigate this new world while also facing the strong likelihood that something unenjoyable about your situation heavily weighs on you. In the end, though, your situation is temporal. So, make the most of your year, and try to make it work the best you can. Remember not to put too much pressure on yourself if it all doesn’t exactly go to “plan” because you’re only going to set yourself up for disappointment by having unrealistic expectations.

If you could change anything about your internship, what would it be?
There is not anything I would change, the more I think about it the more everything (the good and the challenging) helped me grow. Maybe if there is one thing it would be to build more of a bond between myself and co-workers, maybe scheduling lunch each day with a different one just to build those interpersonal connections. Hindsight is 2020 though, but if I was an intern working at a large corporation such as Citibank or BlackRock, I would suggest doing something like that due to the vast network you’d be in.

What happened after completing the year – what did you do next?
I arrived back home and completed my dissertation since I did the MA (Master of Arts) academic program. After doing this I job hunted and landed an internship in New York City over the summer with a consulting company called EXL Service. The position had to do with my dissertation which was great.

Where are you now in your working life and what do you do?
Today I work for a consulting company called Genpact. I am a process designer working within Business Process Management on a consulting engagement for a large bank. I even relocated too and moved from the New York City area to Charlotte, North Carolina.

Do you have any future plans that you would like to realize and what are they (career & social)?
Right now, I’m focused on my current job and see myself doing what I’m currently doing for another couple of years. With that experience under my belt, I should have options to explore. I’ve thought about maybe going back for an MBA after that, but I’m not entirely sure just yet. I’m forever grateful to the Mountbatten program because I wouldn’t be where I am today without it. Not only did doors open for me, but doors opened I didn’t even know existed.

What would people be surprised to learn about you?
I barely cooked at all before Mountbatten, and even during Mountbatten, I was eating a lot of TV dinners. However, in the second half of my intake, in large part due to my roommate who became a great friend, I began to cook. Since then, I rarely go out to eat or eat anything already prepared and packaged. I’ve learned to cook over the time since and I largely stick to a few meals. Funny enough I picked up a book at the end of my intake year written by a British Professor of Genetic Epidemiology at King’s College, London. The book is titled “The Diet Myth” and not only did it change my relationship with food for the better but also forever. I would suggest anyone looking to revamp their diet to read this book.