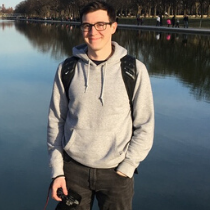 What and where did you study before your Mountbatten placement?
I studied History at Northumbria University from 2011-2014. I was then elected as a sabbatical officer for the students’ union, working there for two years before joining Mountbatten.

What made you apply for the Mountbatten Program?
I spotted the Mountbatten stand at one of the careers fairs at my university and was really interested by the opportunity to work in New York City for a year. There’s a lot of talk about graduate schemes and the next steps after university but I wanted a unique experience and the chance to really test myself in a new environment.

Describe your host company and your role within it.
I was placed at The Wall Street Journal as a Membership Coordinator. Though it is mainly known for the newspaper, the Journal hosts a number of exclusive, invitation-only conferences each year. These events convene the most senior members of the world’s largest businesses and organizations with the Journal’s editorial team to discuss the world’s most pressing issues.

As a membership coordinator, I was primarily responsible for the day-to-day running of our memberships, including database management, subscription activation, membership on-boarding, event outreach and on-site support at conferences.

What was the highlight of your working experience during this year?
I traveled to Washington, D.C. to support our CFO Network Annual Meeting. It was a great opportunity to meet many of the members that I spoke with on a daily or weekly basis, as well as help the events team to ensure the successful delivery of the conference.

I got to see the Journal’s editorial team in action, interviewing some of the world’s most ambitious and influential leaders from industry, finance and government. Seeing Elizabeth Warren and John McCain on stage were particularly memorable.

What was the social highlight/most memorable moment during this year?
I wanted to continue my hobbies whilst in New York City so I’d have to say joining a football (soccer) team. I got talking to a local at a New York City FC match who told me about a website for the city’s football leagues and I ended up joining Manhattan Celtic.

I trained and played weekly, got to travel around the city for the matches and met lots of locals. It really helped me feel a part of the city and not just a visitor for the year. Even though my time with Mountbatten ended before the season did, I still follow the team from afar!

Please share a little wisdom/philosophy that you acquired during your internship
1) A year seems like a long time but it really does fly by. Try to think of having 52 weekends in NYC, and what you would do on each one. There’s so much to do and see, and the time there will quickly get ahead of you – the best thing to do is throw yourself into it.

2) Try to immerse yourself in the experience and imagine you’re not a visitor for the year but someone who is living as a ‘New Yorker’. As well as making friends and hanging out with your fellow trainees, do your own thing – make friends with locals, continue one of your hobbies or pick up a new one. Do something that makes you feel like you live and belong there.

If you could change anything about your placement, what would it be?
Within my role, I wish I had been a bit more forthcoming with my own ideas and more forward with requests to do extra-professional activities, such as assisting some of the other teams or finding opportunities to develop my experience and skills. I certainly got a lot out of my year there but I wish I’d pushed myself that bit more.

Outside of my role, I wish I’d seen more of New York City, but there’s only so much you can do in one year!

What happened after completing the year – what did you do next?
Once I’d finished, I took a short break and headed to the West Coast. After I returned home, I took some time out before beginning the job hunt. I did some freelance work and some temp jobs whilst searching for a permanent role.

I didn’t go to the US with a career path in mind (and didn’t return with one either), but after taking the time to think about what I cared about, what I found interesting and what challenged me, I knew what I wanted to do.

Where are you now in your working life and what do you do?
I’m currently at the start of my career within the public service sector. I’m building a broad range of experiences and knowledge to help me progress further.

Do you have any future plans that you would like to realize & what are they (career & social)?
In my career, I don’t have any firm plans at the minute. I’m happy where I am and look forward to whatever may come over the coming months and years.

Outside of my career, I’ve completed the Yorkshire Three Peaks a number of times and would quite like to give the National Three Peaks a go. I’ve also never tried running a marathon so that’s on the list too.

What would people be surprised to learn about you?
I still have a New York bucket list that seems to be ever growing. I’ve just returned from a holiday there and will likely be going back again in the future!