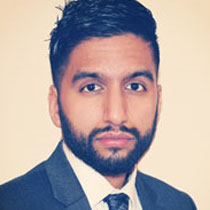 What and where did you study before Mountbatten?
I graduated in Business and Management from Aston University, with an Upper Second Class (with Hons) in 2011. During my third year, I completed a work placement in London and in fact, upon graduating I was offered a permanent position with the same firm (Pinsent Masons LLP). I worked here for two years before embarking on my Mountbatten journey.

What made you apply for the Mountbatten programme?
My first exposure to the Programme was through Facebook and seeing old friends of mine seemingly having the time of their lives! Hundreds of pictures of the New York skyline would flood my news feed, and eventually I reached out to them to find out more. It was abundantly clear that they had made the right choice in pursuing a journey that allowed them to live, train, and study in one of the greatest cities in the world. Furthermore, I was very keen to make the transition into the financial industry and the Programme had a very strong financial leaning. After all, this move had to make sense from a career perspective; and thankfully it did.

Describe your placement.
I was initially placed at Citi Private Bank for six months. Although my time at Citi was useful, unfortunately it didn’t work out as planned and through a mutual agreement, and with tremendous support of those at Mountbatten, I was able to complete my final five months at JP Morgan & Chase, training as an Oversight & Control Analyst in their Asset Management division. Little did I know, but this was the start of something truly incredible.

The O&C function was in its infancy at the Firm, which actually was a massive opportunity for me. Suddenly I was involved in strategic meetings about the way we should be managing and thinking about our firmwide operational risk. I had opportunities to organize, present and talk with senior management across the team and managed to learn a great deal about the Firm’s risk environment.

What was the highlight/most memorable moment of your training experience during this year?
For me, after a shaky start, I managed to turn it around and pick up the Bob Johnson Memorial Award at the end of my internship, presented to me by the Director-General at Mountbatten. This award was nominated by my peers at JP Morgan & Chase and I was humbled to know that I left a positive impression in such a short space of time. Upon completion of the Programme, I was fortunately offered an Associate position within JP Morgan & Chase back in London, reporting to the same manager (and now mentor) as I had previously.

What was the social highlight/most memorable moment during this year?
I was privileged to represent the Mountbatten Institute and speak at a Future Young Leaders Symposium at the Turkish Consulate in Manhattan. This was a huge highlight for me as it provided me with my first real exposure into the political arena.

Please share a little wisdom/philosophy that you acquired during your year
During my internship, I quickly realized the importance of building meaningful relationships with my support network. This could include colleagues, managers, friends, partners or otherwise, but rest assured, sincere relationships will always last forever. After I settled into my placement, I would go for a coffee with someone different, every other week, not with the objective of securing a position post Programme, but more so to learn and widen my network. Of course, it was also an opportunity to leave a lasting and favourable impression on the person, by showing your willingness to learn, develop and succeed. I believe this really helped me in cementing relationships with people inside and outside of my training placement, that continue to help me in my personal and professional life.

Ultimately, my unique experience with Mountbatten taught me to prepare for the unexpected. Life will always throw you curveballs, but ultimately you still retain control of how you adapt to them. The onus is always on you to step out of your comfort zone and make the year memorable. I remember my father saying that it’s easy to visualize success when things are going well for you, but what’s not easy to do, is to go through hard times and still visualize success. This for me is the key – never lose hope or belief in your ability, despite what is happening around you.

If you could change anything about your year, what would it be?
I firmly believe in God’s plan and was thankful that the Programme offered me countless opportunities to broaden my skillset and experience. Clichéd as it sounds, and despite the rocky start, I doubt there would be anything that I would change, as the internship proved instrumental for my career and the support that I received from my colleagues and friends was incredible.

What happened after completing the year – what did you do next?
Immediately after the Programme ended, I returned to London, and got a position as an Associate in the JP Morgan & Chase Chief Operating Office. 16 months later, I was offered a sponsored expatriate relocation back to New York, to work for the same team I had done my Mountbatten training with. For me, I always felt that I had left New York prematurely and I was chomping at the bit to return and continue my momentum across the Atlantic; safe to say, I did not hesitate when signing the paperwork. Fast forward 8 months into my relocation and I was lucky to have been promoted to Vice President, which was a massive show of faith despite my tender age. The two years subsequent to Mountbatten has truly been surreal – the Programme has played a key role in opening up doors of opportunity and success; something that I will always be grateful for.

Do you have any future plans that you would like to realise & what are they (career & social)?
The last two years (in particular) have taught me to dream without any limits; to truly believe in yourself and your aspirations. Aside from continuing to progress in my career, I would love to build a school (in honor of my parents) in an underdeveloped country. I have ambitions to join a non-for-profit board and though slightly left-field, I also have a dream to hold a political position, either in New York or London, to connect and inspire positive change within local communities.

What three words would you use to describe yourself?
Ambitious, Resilient, Loyal.

What would people be surprised to learn about you?
I was an Essex County Cricket Academy player for two years during my teenage years. I certainly wasn’t good enough to continue at that level and have thus resorted to playing at local club level, which is just as fun but minus the pressure!

Is there any other information that you would like to be included?
Honestly, I’m not sure where I would be in my career without the exposure, visibility and opportunity that Mountbatten gave me. So my advice is to embrace the opportunities, the challenges and the entire journey. It truly was the start of something very special…