On 8th May alum Sadie Whitelocks, New York Program, March 2010 Intake, who works for MailOnLine, went on an expedition with former Special Forces officer Neil Laughton, who was leading a team of intrepid dinner party guests to Everest’s North Col to smash the World Record for the highest dinner party. Sadie’s good friend and fellow alum, Jane Chynoweth, New York Program, March 2010 Intake, was also amongst the team, who all had to scale a 1km-high ice wall as they navigated their route being careful to avoid gaping crevasses. Once they had reached their destination, one of the mountain Sherpas stood in as chef and served the food that had been prepared by two-Michelin Star chef Sat Bains, before being freeze-dried and flown to Tibet.

Sadie had met Laughton through a mutual friend, and signed up for his extreme dining adventure after having a brief coffee with him in London. The trip combined Sadie’s love of socialising with extreme mountaineering, however, in Sadie’s words, “there was a point where I thought I’d bitten off more than I could chew… but thankfully with some determination and support from my team members, I made it to the world’s highest dinner party for what will be one of my most memorable meals for years to come!”

Many congratulations to Sadie, Jane and the team, whose expedition raised funds for the mountaineering charity Community Action Nepal. 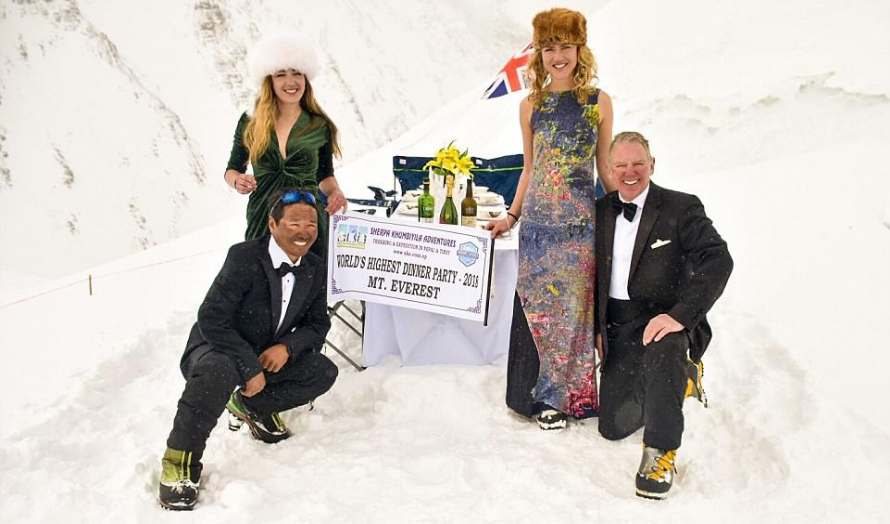